In Preliminary Steps Toward a Universal Dynamics of Intersexual Selection, I outline in much detail a very “basic” model of Hypergamy. The model is basic insofar as it results in a simulation that is designed to capture the most salient quality of Hypergamy—inequality in rank-order preferences between men and women on the dating market—with as few explicit assumptions as possible. Note that I do not feel compelled to model actual sexual relationships at this stage, or to allow my agents to grow old, reproduce, and die. I just want to know how they would rank each other in an ideal world.

What is important now is that the expected outcome of the simulation is not sensitive to my initial simplifying assumptions. It turns out that by adding additional details, we do not add much more in terms of explanatory power, in that not much more of the variation in expected output is captured by the model. I do not discount the possibility that future extensions to the model may serve useful when asking more nuanced questions, but I will ignore these for now. 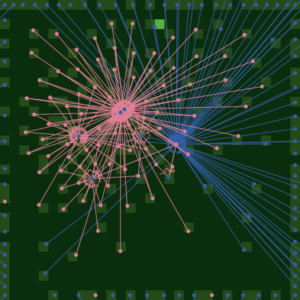 To quickly review, I set up the model as follows:

In this post, I would like to simply catalog various qualitative differences in the simulation output by holding certain inputs constant. For example, what happens if I set the ratio of men to women in the total population equal, as opposed to varying it in one direction or the other? What happens when Technology, S, = 1 as opposed to 30 (double the average distance to the center of the simulated world)? What happens when the total population is varied and the agent space (world size) is held constant?

I run each of the following simulations for at least 1000 ticks (100 ticks on slower runs) to ensure statistical significance.

The above seems to be our Baseline World. No individual man or woman possesses a distinct advantage over the other in terms of satisfying either of their Masculine- or Feminine-Primary Imperatives, to borrow the now famous term from Rollo Tomassi. Despite this, however, the Hypergamy Ratio, which tracks the number of incoming female-to-male over male-to-female directional links on the network is consistently, albeit only slightly, above 1.0, at 1.15 on average. This is interesting to note, because even though nothing in the model explicitly favors a feminine imperative, women still exert some pressure as the genetic gatekeepers of society. This is surprisingly realistic.

This Baseline World, in the end, is best interpreted as something similar in kind to the Perfect Competition model of Economics 101. It is a theoretical sexual landscape structure, from which statistically significant deviations must be rigorously explained. In my personal opinion, this is what I believe the world looked like during the Paleolithic, a world of hunter-gatherers in which female sexual selection preferences were sensitive to significant differences in predictors of relative social status, but not so sensitive that any one member of that tribe was capable of monopolizing the vast majority of all sexual interest. This, in contrast to today’s world, in connection with Tinder and the relaxation of social norms with respect to public displays of sexuality, is what we tend to see in the simulations below.

At least compared to baseline, a high population ratio of women to men tends to increase the level of Hypergamy in the simulated world. Odd, however, is that there is little divergence in preferences. Despite men and women preferring each other equally, men have more incoming links than women. There is also a far greater number of less-connected women. The men in this simulation have more than their fair share of love interests, but this is largely due to the law of large numbers, not to a reduction in Hypergamy. This, at least is expected from a high f/m ratio where not enough time has elapsed to link all members of the population. Though there may be other forces at play… 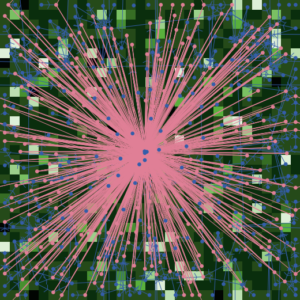 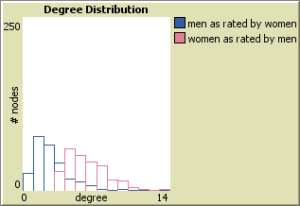 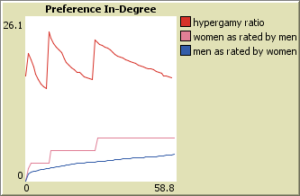 This one speaks for itself. Allowing both men and women to maximally navigate the world, by increasing our parameter for technology, S, to 30 (twice the average distance to the center of the world for any one particular agent), unilaterally benefits the female agents. There are almost twice as many male agents with zero incoming connections. 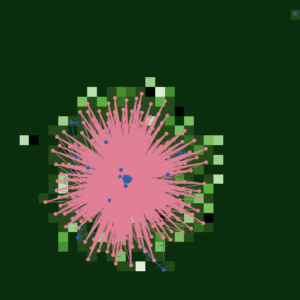 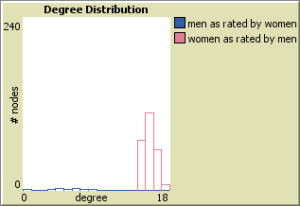 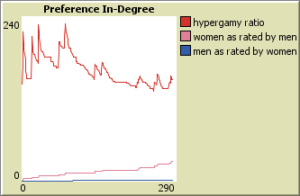 As expected, increasing the population of women to men also increases the overall level of Hypergamy, from 2.0 for an equal population sex ratio to an astonishing 20.0 when women outnumber men 10 to 1. Obviously, there are few planets in our Galaxy where this can possibly ever be the case, but it stands to reason that a doubling of the population sex ratio should increase the level of potential Hypergamy because women would still rather compete for status than settle for what are to them less qualified Beta males. Given that this scaling law applies to the population at large, we can probably safely assume that for the subset of the population that is single, where women outnumber men 2 to 1 Hypergamy will be 50% higher. At maximum technology, S = 30, the entire world is accessible for both female and male agents, and again, women benefit unilaterally.

So far I have not actually made an attempt at a normative claim with respect to which of the various worlds I, as a male agent would prefer, or rather, We, as society in general should prefer. At this stage of the game I simply endeavor to show that what I’m doing kind of makes sense. Technically, my goal was demonstrate how variations in a few of the major model parameters, such as the population sex ratio, or the accessible search space for potential mates, results in different, albeit consistent simulation outcomes for each run. Unfortunately, there are far too many scenarios to review, and I have yet to actually validate any of this against real-world data. Given that the model does what we expect it to, at least qualitatively in terms of what we would expect to see in the real world (with a Power Law degree-distribution in Open Hypergamous societies, and a Bell Curve or Standard Normal degree-distribution for Monogamous societies), I am for now quite satisfied with the results.

In future models, it would be interesting to examine the following:

Any questions or comments? Do you see a flaw in any of my conclusions, or with the model itself? Am I totally wasting my time? Either way, feel free to discuss in the comments section below. Cheers.

5 thoughts on “What Can a Computer Simulation Tell Us About Hypergamy?”