I attempted to outline an answer to the question, “Why does it appear that the vast majority of women prefer the same small group of men?”

I began by wondering if a simple statistical model, simulated in NetLogo, could qualitatively produce the same distribution found “on every dating site…Tinder, Match.com, DateHookup (as per the figure above)”. In my model, I decided to test how simple mate selection strategies resulted in wildly different statistical distributions in each of the final selection pools.

In the simulation, men make their mate selection decisions by minimizing over the age of their prospective partners, whereas women maximize over the status of the men in their accessible vicinity. Could it be that just two simplifying assumptions are enough to replicate real world data, even if only qualitatively at first? Following Solow’s Law of Simplicity, which states the the results of a model should not be very sensitive to its simplifying assumptions, I pressed forward.

If one were naive and simply assumed that men and women preferred within each other a balanced distribution of personality and other socioeconomic qualities, then the world really ought to look a lot more like the first two of four computed simulations above. But it doesn’t. Although the simulation results above show only the most extreme scenarios, one biased in the direction of the median man (Regulated Monogamy, or Patriarchy) and the other in the direction of the median female (Open Hypergamy), it is interesting to note that contemporary real world data looks a lot more like the extreme scenario on the female side of spectrum.

In summation, I found the following: 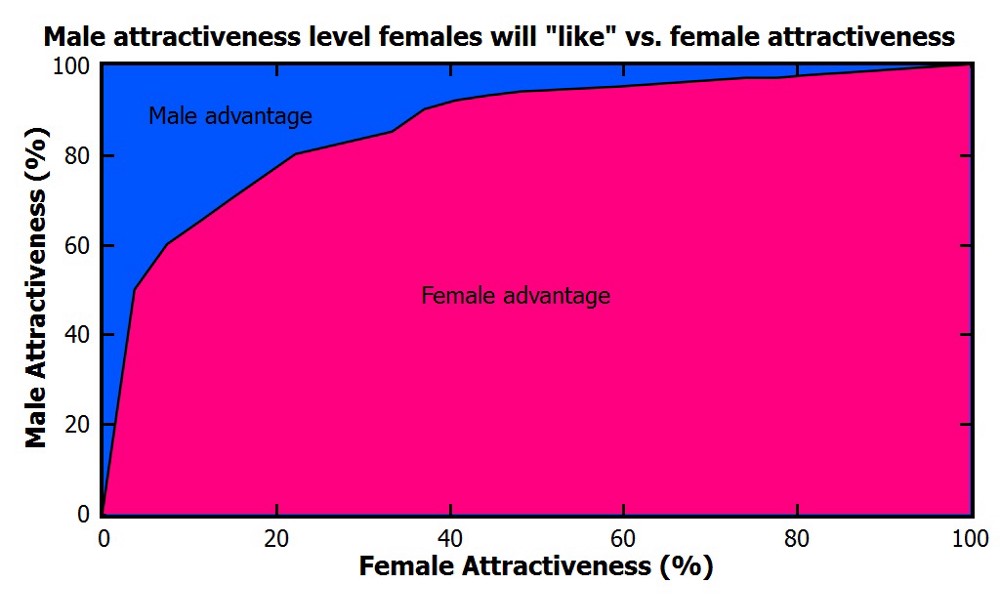 At this point, I would like to speculate far beyond the scope of my initial simulations. Hypergamy, I believe, as an evolutionary mechanism, is likely not restricted to dating markets alone. Successful genetic algorithms for manufacturing the ideal “kitchen sink faucet” (see Genetic Algorithms in Industrial Design), for example, could likely benefit from a system that maximizes Hypergamy. In summation, Hypergamy is a general purpose filtering mechanism for maximizing the genetic quality of a stock of evolving agents.

In simple systems with few additional feedback loops, Hypergamy can be a good thing. In complex systems, such as human societies, however, Hypergamy, the mating access and genetic inequality that results, is likely to cause a society to self-implode, in much the same way that too unequal a distribution of household income in an economy, for example, stalls growth by making it impossible for a debt-loaded Middle Class to continue consuming increasingly sophisticated and expensive technology. My next few posts will cover this explicitly. The Mating Economy is likely best understood as a series of feedback loops, in which a balance between Regulated Monogamy and Open Hypergamy maximizes the “socioeconomic growth rate” of a Civilization.

If you enjoyed this article, get email updates (it’s free).

One thought on “How Does Technology Affect Which Men Women Choose?”